KARACHI: Federal Board of Revenue (FBR) will start proceeding to blacklist a major oil marketing company after suspending this week for non-compliance and suppressing sales to evade taxes.
The FBR suspended the sales tax registration of M/s. Hascol Petroleum Limited earlier this week for evading sales tax to the tune of Rs3.9 billion by concealing actual sales.
The status of the company for active sales taxpayer is remained suspended on the official FBR website till 2:50AM on May 02, 2019. 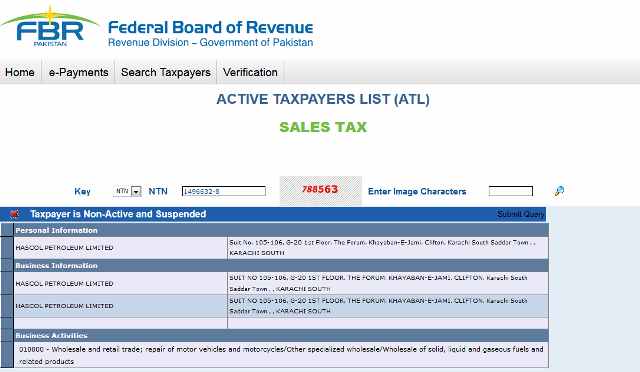 The status of the company can be checked at https://e.fbr.gov.pk/atlsearchutility.aspx?PID=BLcOS/IMzEf3Rn3kVI062g== by inserting company’s sales tax registration number (STRN) 1200271018373 or through National Tax Number (NTN) 1496632-8.
A notice issued on April 29, 2019 for suspending sales tax registration of the OMC said that the company had concealed and evaded sales tax amounting to Rs3.69 billion and further tax amounting to Rs279.84 million.
“Therefore, registered person is being charged with the contravention of Section 3, 3(1A), 6, 22, 23 and 26 of the Sales Tax Act, 1990 and Rs3.97 billion is recoverable Under Section 11(2) of the Sales Tax Act, 1990, along with default surcharge Under Section 34(1) and penalty Under Section 33(5) the Sales Tax Act, 1990,” according to the notice.
The notice also stated: “sales tax registration of above mentioned registered person is hereby suspended with immediate effect till finalization of the proceedings,” it added.
The OMC through a notice to Pakistan Stock Exchange (PSX) on April 30, 2019 flatly denied all the charges stating that it was not involved in any form of theft and tax fraud.
Some section of press ran the story regarding suspension of sales tax registration of the company along with charges framed by the FBR. The notice sent to the PSX by M/s. Hascol Petroleum Limited also threatened to initiate legal action against such news reports.
FBR sources said that suspension of sales tax registration of any company was not done on the wishes of a person. It is thorough process and a commissioner of Inland Revenue only issued such order after having sufficient records.
The sources further said that since the centralization of system the suspension of sales tax registration was done through the main system of Inland Revenue and WeBOC system.
The sources said: “Commissioner shall issue written order to the concerned registered person detailing the reasons for suspension. The order shall also be provided to all other Large Taxpayer Units (LTUs)/Regional Tax Offices (RTOs), the FBR‘s computer system, the STARR computer system and the Customs Wing computer system for information and necessary action as per law.”
They also said that suspension of registered person will make them ineligible to avail input tax adjustment/refund. “Similarly, no input tax adjustment/refund shall be allowed to any other registered persons on the basis of invoices issued by such suspended person (whether issued prior to or after such suspension).”
The sources said that the suspension would also disable a company to file a goods declaration in customs system for clearance of consignment.
What is post suspension?
According to FBR’s official website the suspended registered person will be issued a show cause notice (through registered post or courier service) within seven days of issuance of order of suspension by the Commissioner.
“The registered person will have an opportunity of hearing with fifteen days of the issuance of such notice clearly indicating that he will be blacklisted.”
In case of non-availability of the suspended person at the given address, the notice may be placed on the main notice Board of the LTU/RTO.
The sources said that where the show cause notice is not issued within seven days of the order of suspension, the order of suspension shall become invalid.
The notice issued by LTU Karachi to suspend the registration: 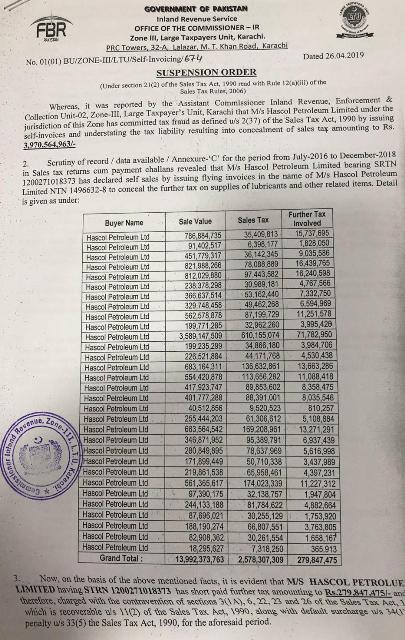 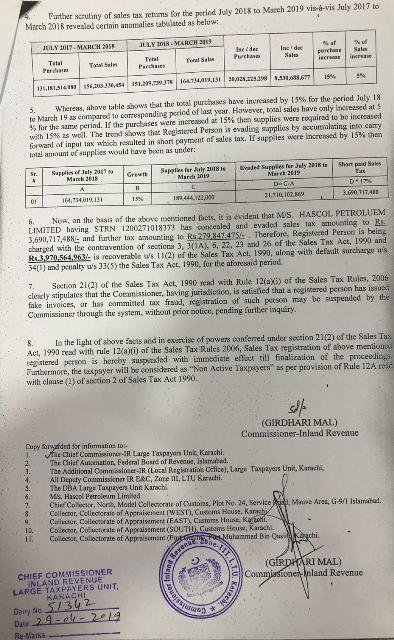